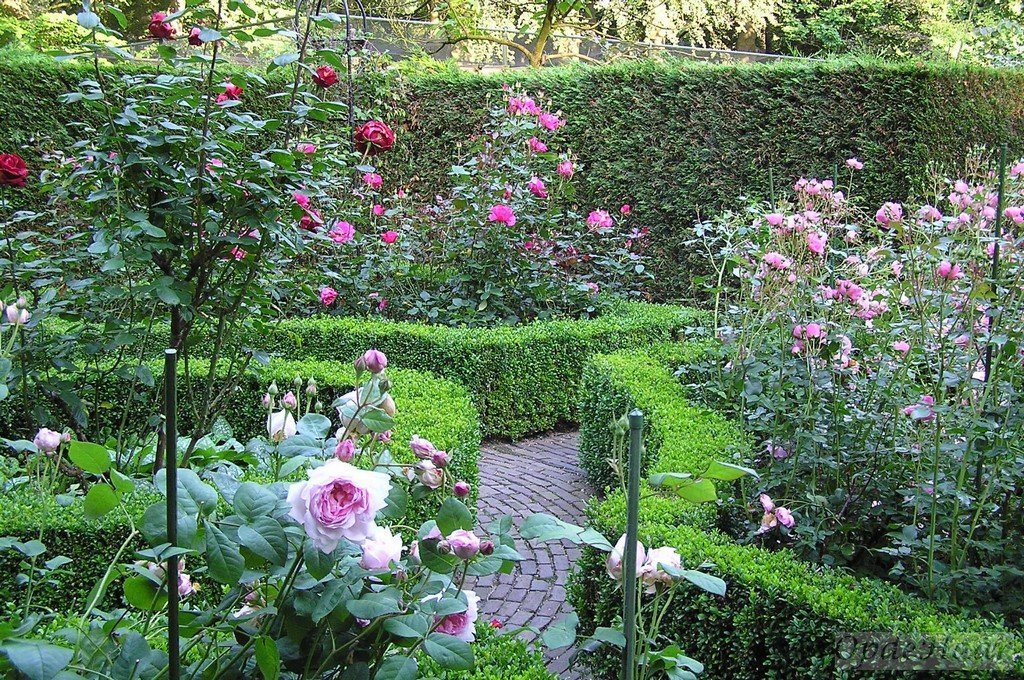 The rose garden with box-lined beds enclosed by a chamaecyparis hedge planted using a double row of conifers was inherited from the previous owners of OpdeHaar. This conifer does not sprout from old wood and although, when young, it was attractive it has expanded millimeter by millimeter over the years with only a green outer skin masking an internal mass of dead twigs. Moreover, it kept the sun off significant portions of the roses during the day. In 2013 and 2014 we removed all of this hedge and integrated the rose garden into the rest of the garden. The photos give an idea of what has been achieved.

The box hedge edging of relatively small rose beds in the rose garden is visually attractive but does demand that one ensures that the adjacent roses in particular are regularly well-fed because they face competition from the box and noticeably suffer if they are at all neglected. Visitors often ask what we do to avoid ” box blight” attack and the Internet provides extensive background on this for those who require more information on the topic. We work on the principal of keeping our plants  “unstressed” i.e. not exposed to extremes of drought or lack of feed and keep the beds clean by not allowing dead leaves or clippings to lie around which can act as stores of fungal spores (also for the roses). Ensuring efficient root systems by the use of mycorrhiza fungi and maximizing inherent plant resistance by stimulating natural micro-organisms (EM technology, Professor Teruo Higa) are additional procedures. Entering these terms into an Internet search engine will give more background.

The roses in the beds are:

In the perennial borders can be found:

The freely blooming orange Rosa “Westerland” can also be found at the end of the swimming pool.

At the end of the “Fire and Ice” garden there is:

The winterhard Trachycarpus fortunei (Chusan palm) can also be seen in the rose garden. This photo was taken in 2004, but it has now almost reached the height of the first floor balcony and flowers abundantly each year in May.