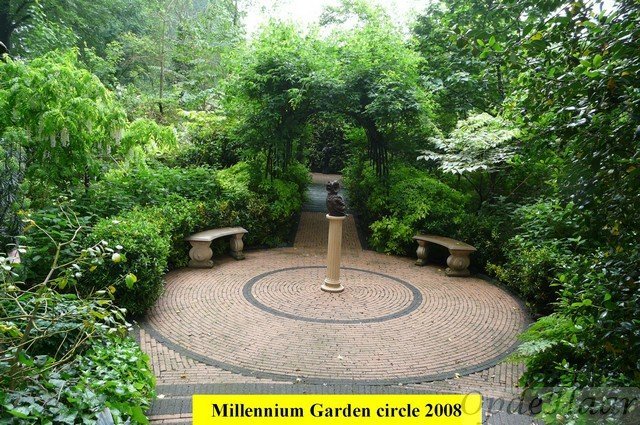 On this page about the Millennium Garden you will find information on:

Straightaway, you will notice the deliberate sense of formality here and some symmetry in the planting directly adjacent to the path which featured a laburnum arch when first designed. Unfortunately there is insufficient sun to get a generous flowering of the Laburnum vossii and so part of the planting on the arch has been replaced by Clematis montana Elizabeth. The approach to the arch features flanking low hedges of Euonymus (with some variegation) backed by Hydrangea “Annabelle” with Wisteria sinenesis “Alba” trained as a standard and Aralia elata “Variegata”on either side.

The Magnolia is “Yellow Bird” (M. acuminata x M. brooklynensis).Although this is not the best yellow hybrid, it was a pioneer (see photo below). Magnolia “Limelight” is better but my specimen elsewhere in the wood is still an infant, so for the moment, no comment! Magnolia “Leda” is a tree with something of a shady past – it is probably a Magnolia cylindrica x M. Cambellii alba hybrid sold prior to 1995 by Esveld as M. cylindrica. This only came to light after an article appeared on the same hybrid with the name “White Lips”

The tall acer is Acer cappodocicum ‘Rubrum” with various shrubby viburnum around its foot. The other plants you can come and see for yourself. Nearby is Trochodendron araloides, a lovely evergreen shrub found in Japan, Taiwan, and S. Korea along with another evergreen shrub from China/Japan – Daphniphyllum macropodum. Both plants are quite hardy with us as are the various Fatsia japonica both here and in other areas of the garden. (Someone in a visiting group invariably confuses Fatsia with Monstera deliciosa (Philodendron) houseplant.) The Trochocendron, Daphniphyllum and Fatsia are all plants which thrive in light shade.

To your right on the ditch bank, the ever-more massive steely blue leaves of Hosta sieboldiana “Elegans” almost threaten to close off the ditch as summer progresses. Its hard to imagine this same scene in February/March when the hosta are still invisibly hibernating and you wonder if they are still there! However, the bare and steeply sloping bank is marked by a gaudy display of mixed botanical crocuses.

Hopefully, the large leaved hostas on your left as you descended the steps into the garden have remained at the back of your mind and continuing the circuit of the perimeter path will bring you back to them.

Looking to your left on the way is a large area under tall oaks with several interesting shrubs and small trees which include a juvenile Salix magnifica (Wilson, 1909, W. China) whose leaves look more like those of a magnolia. As I write, there are literally hundreds of seedling pieris springing up in this area. We are letting develop to see if anything interesting emerges.

A collection of arisaema is in the making and quite a few types of ferns are there, in addition to many other perennials. Now let us go further.  Arisaema sikokianum and the secretive Arisarum proboscideum along with other aroids are here. Rather pretty variegated Japanese ferns or miniature creeping ferns such as Gymnocarpus are all there competing for attention. However, this plant selection “below the knee” is just too varied to describe in detail on a website.

Amazingly, in the ditch is Hydrangea heteromalla – its claim to fame is that it is one of the few hydrangeas that assume the form of a small tree as it matures.

In May/June the 2 large kalmia’s are also in flower. Although we don’t get many visitors in February, but if you should come, you would see the rather strange Edgeworthia in flower

Moving on, we find a lovely souvenir of Nick along with the Sequoia sempervirens close by that was also a present from him.

This is a quick sampler of the sort of things you can find in our front garden. Although if you know where the plants come from, who introduced them and when and the story behind the hybrids such as hosta varieties you will enjoy them even more. 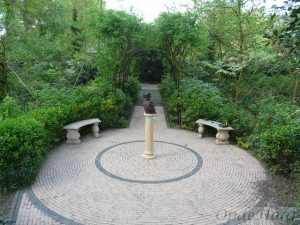