This section of the website is about the shade loving, flowering, perennial woodland plants which are growing in our woodland garden at OpdeHaar in The Netherlands. Perennial woodland plants by definition are shade tolerant. Fortunately, our woodland is mainly moist and we have few places where we have to cope with dry shade. Also, our wood is noticeably cooler on a hot summer day than the rest of the garden. On the other hand, in winter the trees provide protection from frost.

Perennial woodland plants flower mainly in the spring before the leaves on the trees provide a denser shade cover. However, there are some notable exceptions, such as begonia and impatiens.  In fact, a woodland garden can be enjoyed throughout the year. It starts with the spring bulbs, snowdrops, bluebells and narcissi (see bulbs). In summer there is a cool canopy of leaves overhead and in late autumn the floor of the wood is often covered in  mushrooms and many trees are showing their autumn golds, reds and yellows. (See trees).

In contrast to many other areas of a garden a woodland is made up of 3 layers.  The perennial woodland plants are on the ground. While shrubs, such as holly, rhododendron, camellia and skimmia  form the middle layer. The upper canopy is the trees such as acers, magnolia, silver birch, beech and oak.

For information on planting in a woodland, click here.

Click here to learn why some plants are shade tolerant. It is helpful to know the basic botanical principals of photosynthesis and plant nutrition in order to better understand the behaviour and needs of plants grown in either sun or shade. I have chosen to include this summary as an introduction to shade-tolerant plants. Shade-tolerant plants have adapted their prime food-making mechanism (photosynthesis) to reduced levels of sunlight (the energy provider of this process).

All of these plants can be found in our woodland garden

All photos were taken in our garden. Click on the photos for a larger image and a slideshow

Chloranthus are woodland plants which are fairly well known in Japan and S.E.Asia. However as yet they rarely encountered in European and American nurseries. Apparently, C.fortunei is growing on the rockery at the RHS Wisley Garden in UK. This maybe indicates that at least some members of the genus are comfortable in sunny conditions. However, I hasten to add that I’ve not seen the situation myself.

Our plant gave us a good crop of seed in September. These have been freshly sown here and portions given to two plant nurseries. If they germinate successfully then details will be posted. Recent queries (August 2015) around the nursery trade here in The Netherlands revealed that propagation work is going on with at least two Chloranthus species – C.oldhamii and C.fortunei.

Epimediums come in many variants. The photos here show a fraction of what you can see at OpdeHaar. Most are happy in shade and generally cope well with dry conditions. They spread by rhizomes. Indeed some, such as the E.X youngianum hybrids, are vigorous enough to be considered as good groundcover candidates. The old leaves can be clipped off in early February to render the Spring flowers better visible. You can do the Hellebore leaves at the same time! Wikipedia gives a quick review of the genus but the standard text is W.T.Stearn’s “The Genus Epimedium” (ISBN 1 84246 039 0).  This book also covers other members of the Berberidaceae family, notably Podophyllums. It is therefore useful for the shade/woodland gardener.

Epimediums also have medicinal uses in traditional Chinese medicine. Indeed there is more on this on the Internet than on their role as garden plants!

There are a variety of different species of hellebore. However, the following notes are restricted to H.niger, H.orientalis and their hybrids. These colourful plants, together with snowdrops, herald a new gardening year. The flowers of the natural species do rather “hang their heads”. Increasingly various selections and hybrids are available where flowers are more visible and outward facing.  Fully upward-facing flowers can be damaged by snow and rain.

When cultivating Hellebores (and any plant) it is useful to know about their natural growing conditions. H.niger comes from Alpine woodlands and therfore appreciates some lime in a well-drained, humus-rich soil with light shade. They hate wet conditions. H.orientalis and hybrids are a bit more tolerant. They do acceptably well in lightly acidic soils and can take more sun. For owners of country gardens, these hellebores are also rabbit and deer-proof!

Here in our gardens, conditions can be very acidic. We therefore have shrubs such as rhododendrons and camellia which aren’t normally seen with hellebores. While I do occasionally spot-treat the hellebores with lime, my usual trick is to put bits of cement amongst their roots (+ mycorrhizal booster) when I plant them. Bearing in mind that plants are forming buds and getting into growth in the winter months, a top dressing and some general fertiliser in autumn is also beneficial. We also carefully cutaway old leaves prior to flowering so we can appreciate the flowers better.

Having talked about hardy begonias, it seems fitting to introduce the hardy version of “Busy Lizzy”. It is, of course, more grandly and correctly, known as Impatiens omeiana. This plant was originally found in 1983 by Don Jacobs on the famous Omei Shan (Mount Emei) in S.E. Sichuan, China.

It is a beautiful foliage plant which grows to around a foot high. It excels in moist shade and slowly forms a clump. it is therefore ideal as a woodland plant. Yellow trumpet-shaped flowers appear in autumn but, like begonia, it is really a plant which one grows for its foliage. It is also hardy in our winters in The Netherlands. Despite this and it’s ease of propagation, it is still a bit of a rarity in the Dutch nursery trade. Unfortunately it isn’t yet seen in garden centres.

At least two variants are reported by specialist nurseries. In “Ice Storm” the attractive leaf variegation is rather masked by a sort of haze over the leaf. To my mind, a far more attractive and currently rarer variant is a dark leaved, variegated variety called ”Silver Pink” or ”Silver and Pink”. 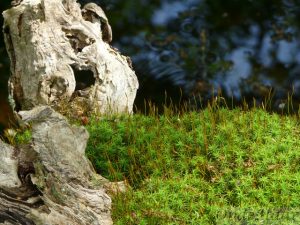 We have several different sorts of mosses in our garden. These plants multiply by producing spores, just like ferns, but simpler in structure. They have stems and leaves, but no real roots, just stems which change to have rootlike appendages, rhizomes.

There are 3 important sorts of mosses – leafmoss, livermoss and crustmoss. Often all 3 sorts are seen in the same area.
Leaf mosses form spores in caps. The spores are either slung through small openings or they are released via 4 splits. However, the spores are more usually dispersed through an opening in the mouth which becomes visible when the cap has fallen off.

Livermoss are either flat and lobed or they have small leaves in 3 rows. Crustmosses are formed from mould in close relationship (symbiosis) with another plant.

One indicator of the health of the woodland is the mosses. We have quite extensive carpets of moss, which we are protective of. However, during hot weather, they shrivel and appear dead, but with a few drops of rain they spring back to life. Unfortunately, with global warming, our mosses are suffering during the hotter summers.

We are certainly no mushroom or fungi experts. However, every autumn, particularly after wet weather, we find all sorts of mushrooms in the wood. I hope that the identification is correct, but don’t trust it. Mushrooms such as sulfur tuft (Hypholoma fasciculare),  the shaggy ink cap (Corprinus comatus), oyster mushroom (Pleurotus ostreatus)  and  turkey tail mushroom (Trametes versicolor) grow on dying wood but do not attack living wood.

Podophyllums are ideal foliage plants for moist, lightly shaded positions and are perfect subjects for woodlands. Taxonomically, along with a surprising number of other woodland species, they are included in the Berberidaceae family.

Podophyllum peltatum occurs naturally in the eastern part of USA up into Canada and is readily available from garden centres. It forms clumps from a spreading rhizome and is fairly fool-proof when kept moist and not exposed to intense sunlight. It generally flowers white in May and red fruits form under the covering leaves.

There are several other Asian Podophyllums with the general characteristic of highly decorative leaves. These are still often found under the nomenclature “Dysosma” rather than “Podophyllum“.  These highly decorative Asian podophyllum varieties are generally expensive. Furthermore, in my experience, they are rather more temperamental than their plainer family members. That said, garden visitors often stop and comment on varieties such as P.veitchii (P.delavayi) and P. difforme.

Podophyllum “Spotty Dotty” is shown in the photos. It is a highly decorative plant. I obtained it some years ago from a local nursery, De Hessenhof. Over about 3 years, it slowly formed a small clump. After that the central area just seemed to disappear. Luckily numerous seedlings appeared and these have every appearance of “Spotty Dotty”.  “Spotty Dotty” is a lovely addition to the woodland garden and here at “OpdeHaar” is as temperament-free as P.peltatum.