The genesis of our collection was a visit to a bamboo park in North Holland after we read a feature in a garden magazine around 1992. The tropical jungle character he has created along with the problem free nature of the plants inspired us to try and achieve something similar in a recently cleared section of the wood. We (correctly) assumed that any invasive characteristics would be countered by ditches which are filled with water for at least half the year. The bamboos blend beautifully with each other.

Nowadays, the Internet is a rich source of information on both bamboos themselves and their suppliers; I refer you to our website section if you need a start. That said, I am old-fashioned enough to appreciate a good textbook and I value T.J. Meredith’s “Bamboo for Gardens” from Timber Press (2001), ISBN 0-88192-507-1. There is also Paul Whittaker’s “Hardy Bamboos, taming the dragon”, from Timber Press ISBN 0-88192-685-X. This last book is the proverbial bible for us in N. Europe since it gives invaluable insights as to the height and spread one can expect in our growing conditions. Indeed, conversations with many visitors to the gardens reveal that many people have what almost amounts to a fear of planting bamboo. The prime assumption, along with numerous other, often largely erroneous, ideas and beliefs, is that they will all spread uncontrollably. This is where Paul Whittaker’s book is so invaluable; written, as it is, by a gardener and nurseryman who literally lives with them and he lays out very clearly which bamboo sorts are invasive and which are not. 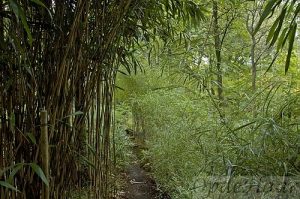 Before describing the bamboos you will encounter in our gardens, it may interest you to pick up on a bit of background information and jargon which will at least impress your friends. Bamboos are members of the grass family, most have hollow stems (“culms”) which are segmented at solid “nodes” and spring from segmented rhizomes. (The Chusquea bamboos from Latin America are the important exception in that they have solid culms.) Clump-forming plants generally have short, curving rhizomes (“pachymorph rhizomes”) which break directly into new culms; spreading bamboos have a “leptomorph rhizome” which sends out both culms and new rhizomes from its nodes. It is the bamboos having a pachymorph rhizome which inevitably die after flowering – I will talk about this later under the Fargesia bamboos. From a gardener’s point of view, it is the rate of spread particularly in our N. European gardens that is relevant and just because a bamboo has a leptomorph rhizome doesn’t imply that it will inevitably monopolise your garden in a short time with a single massive organism reminiscent of the Borg in Startrek! In fact, some of our plants on a leptomorph rhizome seem to grow in tighter clumps than most of the Fargesia or Chusquea plants I’ve seen – these latter are the prototype clump formers.

Bamboos in our garden

I am conscious that a specialist will realise just how much I have omitted from these introductory words and to him/her I apologise – I am not a bamboo specialist. The following summary describes what you can actually see growing in our garden. It is not an exhaustive list of what is available in the trade. In general terms, the various Phyllostachys sorts are distributed around the whole wood while the other, usually smaller bamboos, can be found either on the bamboo walk or in the case of some Sasa and Indocalamnus sorts, on the walk at the extreme south of the gardens. In 1997, we planted several recent Fargesia introductions in fairly close proximity to each other around the perimeter of the gardens. Hopefully the differences will be there for all to see as they develop.

This genus provides the most decorative woody bamboos for our north European gardens. The plants are generally lovers of sunny conditions and have leptomorph (spreading) rhizomes which are mostly near to the surface and easy to control. Somewhat confusingly, the genus is subdivided into two sections designated “heteroclada” and “phyllostachys” although all members of the genus have the genus name “Phyllostachys”. The only reason for introducing this seemingly unnecessary bit of taxonomy is that our gardens have areas which get very soggy in periods of winter rains and members of the heteroclada section are extremely tolerant of this condition thanks to an ability to trap air in their rhizomes. This over, let us review our plants.

Phyllostachys atrovaginata (“incense bamboo”) is edible even when raw and can get to 9m, but 6m is usual. Its new culms, when rubbed, have an odour reminiscent of sandalwood, hence its common name.

Phyllostachys heteroclada or the “water bamboo” is extremely tolerant of swampy conditions and, finally, Phyllostachys humilis (3-5m) which is one of the smallest and is often used as a hedge. (We are also planning to plant Phyllostachys parvifolia.

Phyllostachys nigra is the “black bamboo” widely found in garden centres. While it can in theory reach 17m, this is very rare and most cultivars are much smaller (6m). It has a natural curving habit and it tends to flop a bit, which can be a problem. Phyllostachys nigra “Boryana”“Bory” has much more erect culms but not the fascinating black colouration – culms are more spotted. Phyllostachys viridiglaucescens is another plant with culms worthy of culinary attention but which can tower to a very erect 12m (average 7m) under totally optimal conditions.

Finally, we have two Phyllostachys vivax cultivars –“Huanwenzhu” and the better known Phyllostachys vivax f. aureocaulis which can become a real giant with lovely yellow culms, striped green. Turning from the Phyllostachys genus, we have numerous smaller plants which tend to be very shade tolerant because many constitute the understorey in forests. I will itemise what we have as follows in the various genera. 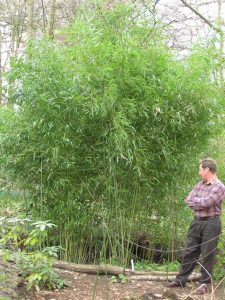 Fargesia are well-behaved, clump forming bamboos, averaging around 3-4 m high, which feature in the diet of pandas. Our two Fargesia (syn Semiarundinaria) nitidia at the start of the bamboo walk flowered last year and this act is invariably too much for these plants on pachymorphic rhizomes and they die – leptomorphs, on the other hand, will often recover. We set about replacing these and discovered that there are recent introductions of numerous new sorts from China which are only really described in informative detail on the Kimmei website in some of Jos van der Palen’s publications. (I suggest that you visit his website, click on “publications” and go from there.)  He and Hans Prins have introduced many of these here. As van der Palen remarks, there is the same potential for new discoveries in bamboos nowadays as there was for plant hunters of the 19th and early 20thcenturies when they were looking for new rhododendron species.

Much as I’d love to trial all these new introductions, I have tried to  select what the two Dutch experts suggest are extra-special and the results are:

The Dutch nurseryman, Hans Verwij, used the coincidental flowering of Fargesia nitida and F. murieliae to produce numerous hybrid bamboos. After selecting out various promising seedlings, these were trialed by Kimmei and De Groene Prins and the final selections entered commerce in 2010. Hybrids from subsequent flowerings are reported to exhibit noteworthy characteristics but are still undergoing trials and selection. We have several of the early hybrids growing in our gardens where we note excellent performance in quite heavily shaded conditions.

Hibanobambusa tranquillans “Shiroshima” (average 3.5m) is an attractive leptomorph and the genus is only found on Mount Hiba where it is thought to have emerged around 1900 as a hybrid of Sasa veitchii and Phyllostachys nigra var. Henonensis.

Indocalamus tessellatus (average 1.5m) has the largest leaves of all our temperate bamboos which tend to droop and obscure the culms.

Oligostachyum lubricum (average 6m) is not very common in gardens and comes from S.E. China. We have only just planted it and to my non-expert eye, it could easily pass as a  Phyllostachys. Come and visit us and see it develop.

Pleioblastus tend to be associated with dwarf shrubs which have spreading or leptomorph rhizomes and some can be mown each spring to achieve an almost lawn like groundcover, I read. We do not do this and have 4 sorts which we grow for their lovely leaf variegation, Pleioblastus fortunei,  Pleioblastus viridistriatus (Pleioblastus auricomus) (average 1.5m), Pleioblastus shibuyanus “Tsuboi” (average 2m) and Pleioblastus chino f. elegantissimus (average 1.5m). We also have a very small variant in the the form of Pleioblastus pygmaeus var. distichus (P.distichus) which clipping will indeed induce to thicken.

Our “Tsuboi” commenced flowering in 2010 and I cut it back completely in 2011. This offerred an opportunity to redesign the end of our Bamboo Walk and make it more accessible by putting in a new bridge. However, as I write, there are signs that this leptomorph rhizome plant will recover and I am waiting with baited breath.

Pseudosasa japonica  or “arrow bamboo” is a plant to use as a windbreak – it is very tolerant of wind and has persisting foliage with the largest leaves of any of the larger bamboos. It can get to 5m plus but 4m is more usual. Its common name arises from its use in arrow making thanks to its very smooth, slender culms which do not have nodal swellings.

Sasa are primarily Japanese bamboos and are typically aggressive ground coverers which form dense forest understoreys. We have Sasa veitchii which we allow to spread so that the characteristic withering/desiccation of the leaf edges in winter is visually akin to an attractive variegation. Less invasive is Sasa tsubioana with a glossier, fuller leaf. I also bought a plant under the name Sasa cernua nebulosa but do keep meaning to check this out; it looks a lot like Sasa tsuboiana. These plants have the largest leaves you will encounter in our temperate bamboos along with the similar Indocalamus tessellatus which one can still encounter as Sasa tesselata in the trade.

Sasa masamuneana “Albostriata” is visually a small leaved sasa with beautifully variegated foliage. A Spring trim improves its general appearance but we hardly ever do this I have to say.

Semiarundinaria fastuosa is a very erect Japanese bamboo which gets to a reported 10m (average 7m) in full sun and is good where space is limited because it spreads very slowly and is easily controlled. In many ways, it is reminiscent of a phyllostachys.

Shibatea chinensis is tolerant of light shade and is used as an ornamental hedge. We have it planted in a section of dry ditch near our pond where it gets pretty much neglected and where it has not spread at all invasively in the 15 or so years we have had it there and it reaches no more than 1m high at most. Whittaker echoes our experience in his book stating “Usually they stay very compact and short in stature, a welcome change from some of the smaller invading bamboos of other genera. The leptomorph rhizome structure rarely shows its true habit and Shibatea can be considered as clumping.”

At OpdeHaar you can find:

Concluding this section on bamboos, I suppose we indeed have something of a collection. However, I do think that the level of shade is too high to allow those which prefer full sun such as Phyllostachys and P. aurea in particular, to achieve their full potential. That said, our contribution must be to demonstrate just how things can develop in shade to form very acceptable plants. As I’ve said repeatedly, many gardeners are apprehensive of planting bamboo, especially in our smaller Dutch gardens. While the fear is understandable, it is unnecessary because all bamboo nurseries supply rolls of tough transparent plastic which can be sunk into the ground to contain any invasive urges when they are present. So, nothing is stopping you if you want to create a bit of Asian jungle between yourselves and next door.