The trees at OpdeHaar give it its unique sphere and character.

All photos were taken in our garden

Click on the photos for a larger image and a slideshow 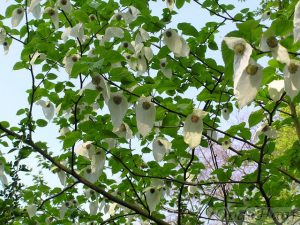 In 1869 Jean Pierre Armand David, a French missionary and botanist, discovered an unusual new tree species in the mountainous Sichuan province of Western China. The detailed sketches which he made showed ghost-like, white leaves which looked like 3 cornered serviettes. He proposed to call the tree the “Chinese dove tree”. Unfortunately he was not able to collect any fertile seed from the tree

Later, a British nursery man, James Veitch, sent plant collectors to China and in 1899, Ernest Wilson collected fertile seed from the Davidia involucrata, named after the original finder, and sent them back to England. Davidia involucrata or “Handkerchief tree” can be found in our garden near to the coffee corner. Davidia involucrata was number 3 on the BBC list of endangered trees. However, this list now seems to have been deleted from their website..

Most Dutch gardens have a little Magnolia stellata tucked away in some corner. Our acid soils, especially when some peat is around, seem to suit these plants down to the ground. The magnolia is the one plant that we seem to be able to just throw into the ground and then watch it grow.

We also have the advantage of having space so we aren’t as restricted as one would be in a smaller garden where one just can’t set about planting trees without worrying about what will happen in a few years. Some magnolia can grow quite rapidly into sizable trees that have a limited aesthetic interest to the general gardener once the flowers have vanished.

So, what is the special thing to look out for if you have only limited space and want to grow something that the neighbours will talk about? One has a choice of really big leaves in Magnolia tripetala, Magnolia officinalis var. biloba, Magnolia hypoleuca and Magnolia macrophylla where the flowers are a sort of added bonus. Turning to flowers, there are scented flowers and summer flowers but the proverbial “black tulip” equivalent is the yellow-flowered magnolia. A classic representative of this is  Magnolia “Yellow Bird”  but improved varieties appear each year and these aren’t always widely available. Speaking personally, the scented and decorative flowers of Magnolia x wieseneri  which appear from June onwards are a favourite although it isn’t a shrub I would recommend for a smaller garden – it tends to sprawl and flowers are not richly borne. It is a hybrid between two species, Magnolia hypoleuca and Magnolia sieboldii, which can also be found in our garden.

My personal favorite is the scented and very decorative flowers of Magnolia x weiseneri  which appear in June.

The 5 member genus Toona is a relative of the mahogany family and is found in China, SE Asia and northern Australia. The Chinese mahogany or T.sinensis is hardy in northern Europe and grows best in sunny positions where it will tolerate poor, dry soils once established. The young shoots and foliage are rich in Vitamin A and are used by the Chinese in cooking; one can also make an infusion or tea. The characteristics of the tree are summarised in the following link : https://en.wikipedia.org/wiki/Toona_sinensis. The pictures here show the spectacular Spring foliage colours of an Australian 1930’s selection called T. sinensis “Flamingo”. This is not very common in the nursery trade and is usually encountered as a multi-stemmed shrub which can get up to 4m. It forms suckers from which it can be propagated and will form scented white flowers when summers are hot enough but this is rare in N.Europe.

Under Miscellaneous  there are photos of: cercis, lindera, liquidamber, pipanthus, syringa, tetracentron.