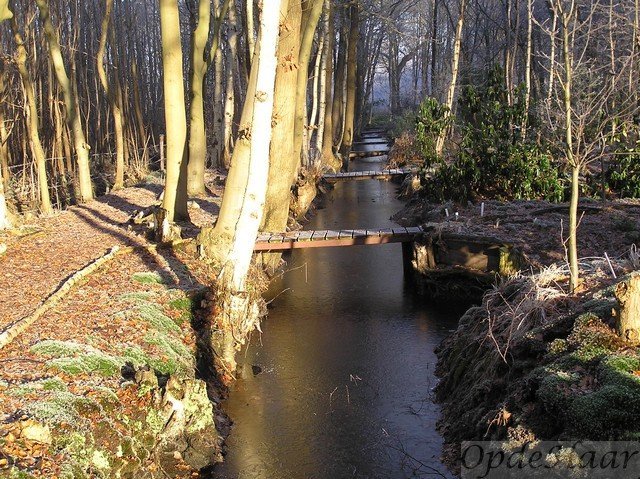 The history of OpdeHaar gardens can be traced back many centuries. Just outside Amersfoort intersecting motorways come very close to marking the geographical centre of The Netherlands. Close by there is a wood of large, old trees. This betrays the existence of the old family estate associated with Huize Hoevelaken. The location of the earliest “castle” is not known. Although it is known that in ca 1410 it was a significant distance from the current “chateau” which dates from 1923.

In 1963 the estate was sold and split up. The “castle” and surrounding park belonged to the Bouwfonds Nederlands Gemeenten. But it is now in private hands. Most of the woodland is owned by the Stichting Geldersch Landschap, (GLK). The GLK is an organisation which aims to conserve the landscape and historical areas in Gelderland.

The foundation stone for OpdeHaar which is situated in the middle of the wood was laid in 1958. It is here that the last owners of the estate lived until 1987. OpdeHaar on the Veenwal (later changed to Hoevelakense Boslaan) means “on the rise in the fen”. Locals relate that the house was built on ground which was previously a potato field. Furthermore it  is higher than the surrounding woodland. In past centuries the woods to the south of the house were clearly very swampy.

History students will immediately identify the intact structure of a “rabattenbos”. A “rabattenbos” is a wood that was drained by excavating earth to create parallel ditches with elevated strips of land in between. These could date back as far as the 13th Century. The ditches are still clearly visible today. According to locals the wood growing on these strips was used for fuelling stoves until the early 1950’s.

When we arrived in 1991, we found evidence of a lot of pollarding. However much of the wood was impenetrably choked with brambles and many spindly silver birches. Many of the ditches were invisible due to this undergrowth. As a consequence of the neglect many of the smaller trees and shrubs had died through lack of light. Notably there was no birdsong to be heard. Fortunately, today light filters through the trees. Indeed the wood is alive with the chattering of many different birds.

The wood in september NOW

Other bits of history of OpdeHaar require that one looks at the large oak and beech trees. Indeed, some of the oak trees on the property are between 200-300 years old. Lines of beech trees flank the road, which leads from the castle through the wood. In addition there are remains of other avenues. One idea put forward is that these may be the remains of a “sterrenbos” (star-wood) planting which past owners of the estate used for hunting.

The front of our house faces due north with the Millennium garden along the boundary.  However, the other main gardens are on the south side. The photo shows a majestic conifer, Abies grandis, flanked by a Liriodendron ( Tulip tree) which were planted around 1958. Unfortunately the abies grandis has died and had to be felled. Other notable trees are Castanea and Tilia.

An Abies grandis was planted in 1958, when the house was built. It looked lovely when we moved into the house in 1991. However, winter storms removed the top of the Abies grandis on at least 3 occasions over the years. And after the last decapitation, sickness took hold and by 2019 it was so apparent that the tree had to be taken down.

The most recent history of OpdeHaar is the construction of a raised bed and a stumpery in 2020 for a new fern collection in an adjacent section of woodland. We used the massive sections of the trunk of the abies grandis which had died to construct containing walls of a raised bed and to create the stumpery. 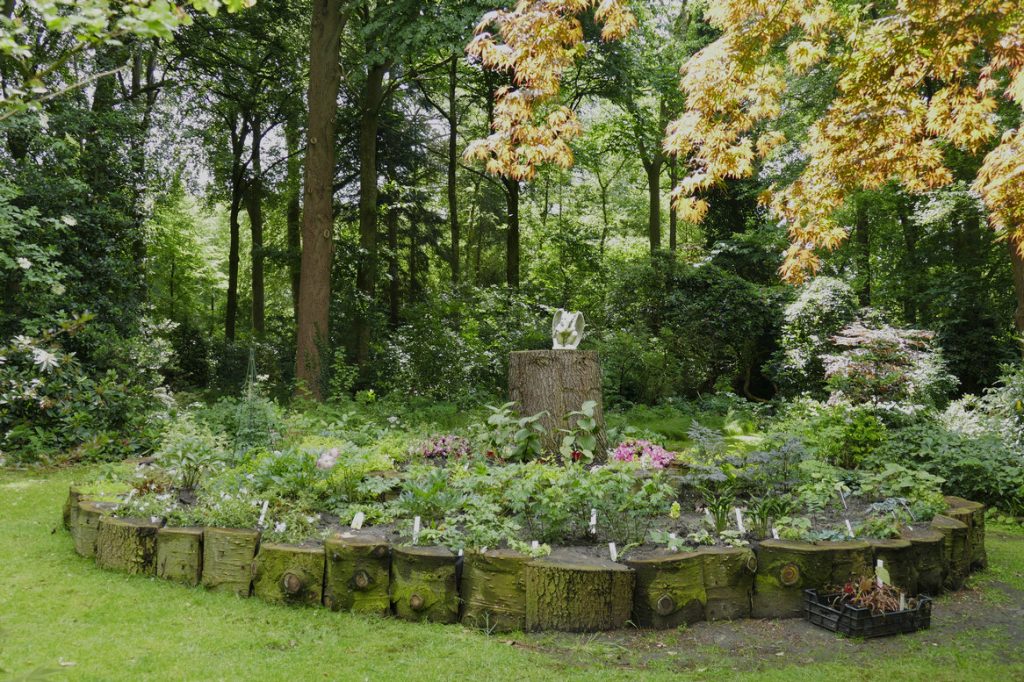 The stumpery under construction in September 2020 ready for the fern collection.

The general layout around the house – brickwork paths and drive and rose garden – were put in by previous owners in the period 1987-1990 along with a pergola which was covered in Wisteria. Unfortunately the wisteria was planted in the rich soil of a planted border and after years of intensive maintenance, the wisteria was removed and the pergola replaced in 2020. (Selected Wisteria have been planted in path-work near The Fire ‘n Ice garden where they produce flowers rather than foliage so the removal from the pergola wasn’t an act of unplanned vandalism!!) The pond, Millennium garden and ongoing planting of the woodland garden are all the work of John & Joyce Ramsbotham since 1991. Visits to this historic garden are welcome. See Visits